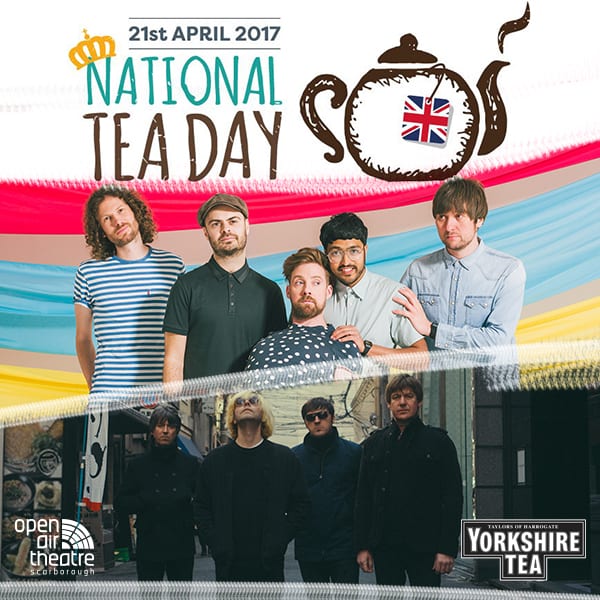 Scarborough Open Air Theatre has joined forces with Yorkshire Tea to give fans of The Charlatans and Kaiser Chiefs a ‘Proper Brew’ to celebrate this Friday’s National Tea Day 2017.

The chart-topping indie bands are both performing at Europe’s largest open air theatre on the beautiful Yorkshire coast this summer.

And anyone who purchases tickets for either show from the Scarborough OAT box office on National Tea Day (Friday, April 21) will receive a special free-gift pack of the world famous Yorkshire Tea.

Both bands are firm fans of Yorkshire Tea – whose well known motto is ‘Let’s Have a Proper Brew’.

Kaiser Chiefs play Scarborough OAT on Saturday May 27 and will be followed by The Charlatans on Friday June 16.

Both gigs are promoted by Cuffe and Taylor, whose director Peter Taylor said: “Yorkshire is famed for producing a cracking cup of tea. Scarborough OAT is famed for putting on amazing nights of live music. It seemed perfect to blend the two for National Tea Day.

“We cannot wait to bring Yorkshire’s favourite sons Kaiser Chiefs here to the OAT on May 27 and then indie legends The Charlatans on June 16. These are going to be two amazing nights.

“So, we are delighted to be joining forces with Yorkshire Tea to give fans of these two great British brands a ‘proper brew’ this National Tea Day.”

2016 saw Kaiser Chiefs headline at V Festival before the release of their sixth album Stay Together which included the euphoric, pop-infused singles Parachute and Hole In My Soul.

The Charlatans – Tim Burgess, Mark Collins, Martin Blunt and Tony Rogers – remain one of the most explosive live acts around with a non-stop jukebox of indie rock’s greatest hits including The Only One I Know, Weirdo, One to Another, North Country Boy and 2015’s stunning Come Home Baby.

National Tea Day was launched to celebrate the nation’s favourite drink. Events are happening all over the country on Friday and tea drinkers the world over can share their stories by using #NationalTeaDay across all social media channels.

Last year #NationalTeaDay was the top trending hash tag in the UK – for 2017 organisers are aiming to make it the world’s leading hash tag.

Tickets for Kaiser Chiefs and The Charlatans at Scarborough OAT are available in person from Scarborough Open Air Theatre Box Office (01723 818111). The first 450 customers on Friday April 21 will receive a free gift box of Yorkshire Tea.

Tickets are also available from www.ticketmaster.co.uk (0844 844 0444) and www.scarboroughopenairtheatre.com or and the Discover Yorkshire Coast Tourism Bureau (01723 383636).