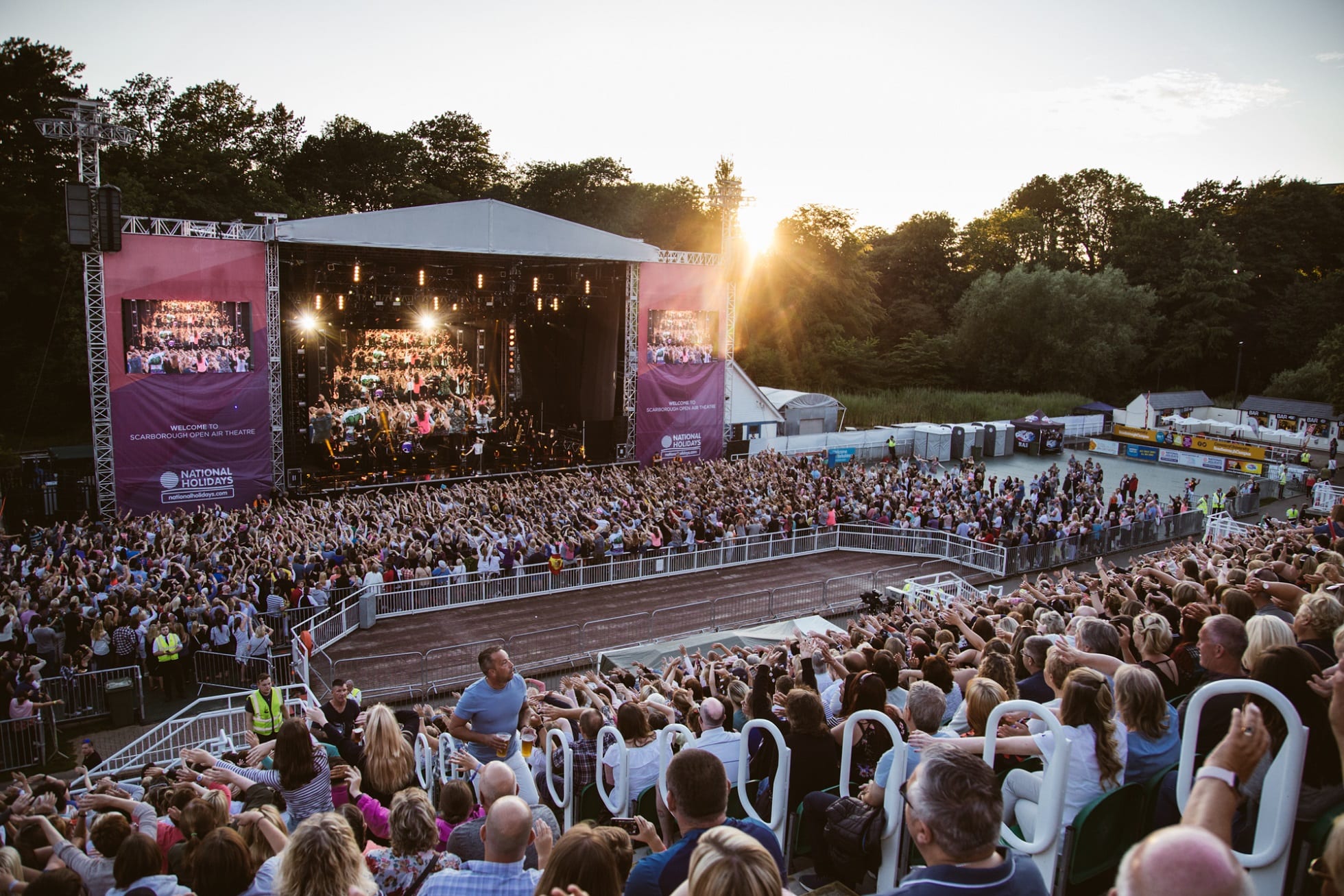 Cuffe and Taylor’s partnership with Scarborough Borough Council to stage live music events at Europe’s largest open-air theatre has been secured for another decade.

The renewed long-term partnership between the concert promoters and the local authority, which lasts until 2028, has been made possible after Scarborough Borough Council agreed a new 10-year deal with Cuffe and Taylor’s parent organisation, Live Nation Music (UK) Limited – the world’s leading live entertainment company.

The deal, which has now been finalised, secures an exciting future for Scarborough Open Air Theatre, which has once again enjoyed a record breaking year. More than 75,000 people attended concerts at the theatre in 2017 – a rise of 50% on 2016.

This summer’s 14 concerts at the Open Air Theatre have seen music fans from as far afield as Japan, USA, Hong Kong, Israel and Australia flock to the Yorkshire coast to see a fantastic line up of artists including Little Mix, Olly Murs, Cliff Richard, The Beach Boys and Jess Glynne.

It is now hoped there will be up to 20 live music events at Scarborough OAT between May and September in 2018.

Cuffe and Taylor have exclusively staged events at Scarborough OAT since 2016.

As well as looking to increase the number of shows, Cuffe and Taylor are now in discussions with the council about raising the attendance capacity at the Yorkshire coast venue by installing a permanent standing area in front of the stage.

Cuffe and Taylor Director Peter Taylor said: “We are delighted with the new and exclusive 10-year deal between Live Nation and Scarborough Borough Council to stage events at the theatre.

“Our partnership with the council has worked very well in the last two years and this new deal allows us to continue working together to secure a bright and exciting future for this marvellous venue.

“We have enjoyed two record breaking years since we took over programming live music events here in 2016, with attendances rising year-on-year. In 2017 sales again have broken all box office records.

“This new long-term deal enables all parties to plan even better for the future. The theatre is now on the map, with not only British artists but major international stars too, and we are determined to continue to bring the biggest and best acts to the beautiful Yorkshire coast.

“We are now working not only on next year’s line-up but on 2019 and beyond. We cannot wait to reveal another wonderful series of shows for next summer which we feel sure will break records again.”

Under the agreement, Cuffe and Taylor, who were acquired by Live Nation earlier this year, will continue to exclusively programme all live music events at the theatre while the council retains ownership and management of the venue.

The council will now work with Cuffe and Taylor to provide a permanent solution to cover the lake in front of the stage. The water was covered by temporary decking during the 2017 season.

Covering the lake will raise the attendance capacity of the venue from 5,454 to 7,456 (seated) or 7,900 (standing), increasing the venue’s flexibility and potentially higher revenue income.

Cllr Derek Bastiman, Leader of Scarborough Borough Council said: “Scarborough Open Air Theatre is a critical part of our visitor economy, helping to raise the profile of the Yorkshire coast as a great destination for quality live music and ultimately attracting more spending visitors to the area.

“The renewed partnership with Cuffe and Taylor, reached through our new agreement with Live Nation, allows us to plan for an exciting future at the venue. Working together, we will ensure that the venue continues to build on its success to date, attracts even more big name acts and brings even more economic benefits to the whole borough.”