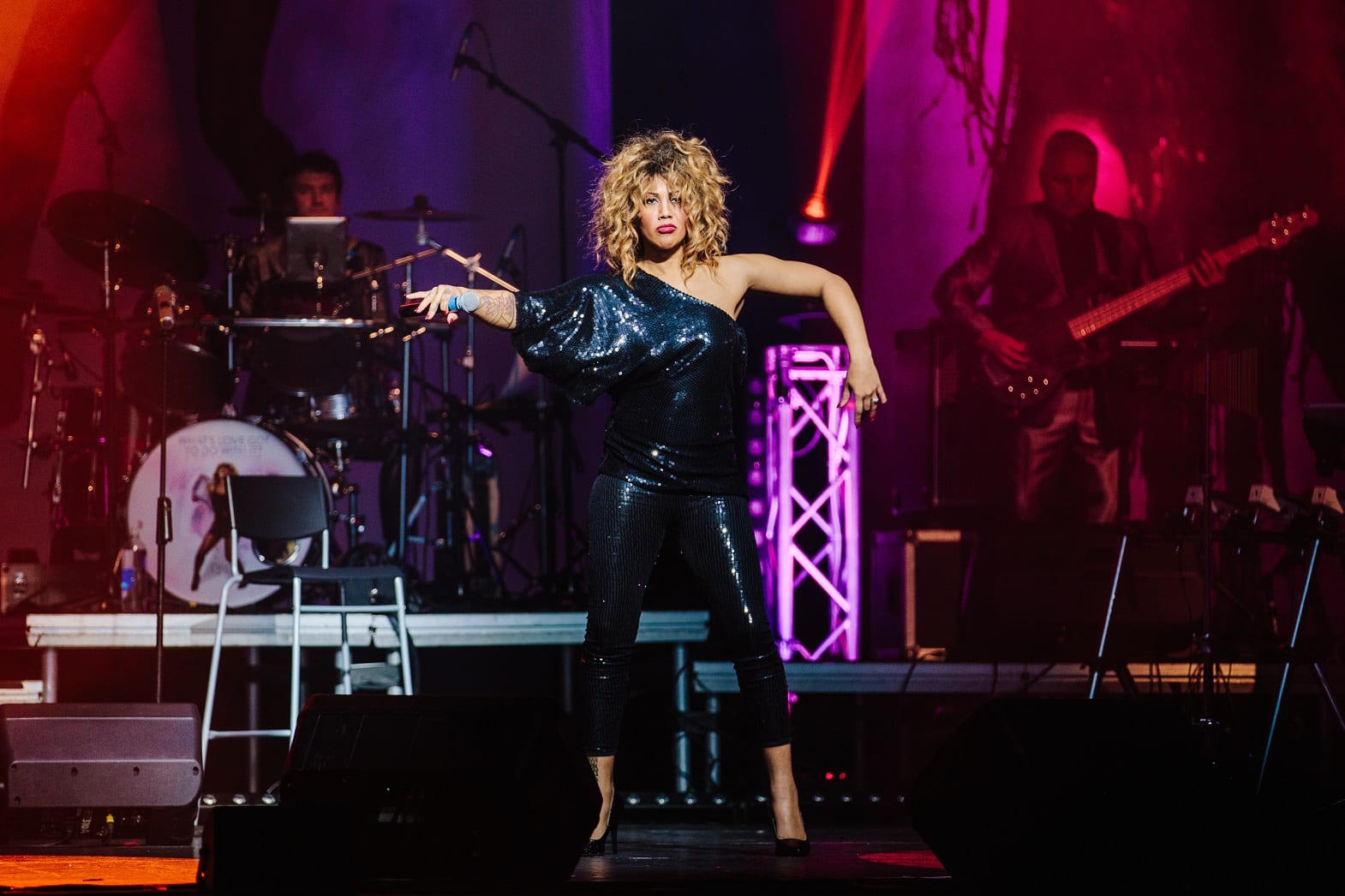 Elesha Paul Moses has paid her dues in the entertainment world; she’s been striving for success in the music business for 20 years, via traditional grafting and TV talent shows.

And now, she’s taken her singing career to a new level starring in the mammoth tribute show tour What’s Love Got To Do With It?, celebrating the music and life of rock, soul legend Tina Turner.

Elesha, 39, who lives in Hampshire and grew up in Surrey, appeared on The X Factor in 2010, alongside One Direction, winner Matt Cardle and in the same category as the big-haired, bongo playing wild card contestant Wagner. She then reached the battle rounds – twice – on The Voice, with will.i.am in a duo in 2013 and Tom Jones as a solo act a year later. She had previously been mentored by Mathew Knowles – Beyoncé’s dad – on a Channel 4 talent show.

She is also touring the UK, and has performed in Europe and Brazil, as the late, great Whitney Houston in Whitney: Queen Of The Night – including five sell-out shows at the Savoy Theatre in London’s West End.

Brought to you by the award-winning producers behind Whitney: Queen Of The Night, What’s Love Got To Do With It? is the ultimate tribute concert paying homage to one of the most iconic musical artists of the 20th Century.

We spoke to Elesha about her love of performing, and how she loves to party with Tina fans all over the UK.

What’s Love Got To Do With It? launched in 2019, you’ve been on the road for a year now – how has it been, paying homage to a rock and soul legend like Tina Turner?

It has been incredible. Heading into the start of the show, I’d been pretty full on with Whitney: Queen Of The Night so didn’t have too much time to think about it… Then it was full on into touring mode for What’s Love Got To Do With It? and we’ve been up and down the country ever since.

There has been so much love for the show from audiences and on social media – it’s been amazing. I’ve been working hard on the vocals, and the band, backing singers and costumes are fantastic. We love being on the road, meeting all the fantastic fans and that’s made preparing for the 2020 tour even more exciting, as we know what the reactions will be.

Fans have loved the show. What does it feel like to see such brilliant responses from the audience, and to receive the amazing reviews online?

It’s surreal, especially for someone like me as I’m really self critical; I’m always thinking ‘What could I do better?’, even when people are saying the show is fantastic. The comments we get are actually a little overwhelming, and we’re so very grateful for each and every one.

Seeing people in the audience having a brilliant night out, dancing and singing along is what it’s all about.

You perform as both Whitney Houston and Tina Turner – they’re very different artists. What’s it like recreating these iconic female performers live on stage?

It’s been a big learning curve, in the sense of keeping pushing on with everything I do for the two shows.

Doing Whitney as well as Tina, you need a huge amount of stamina – vocally, physically and mentally, but in such different ways for each performance. Tina is much more the physical challenge, Whitney is the vocal challenge. But working hard to be at my best in both areas pays off on both shows.

And it’s funny really. They are such different sounding performers! Each role strengthens my voice in such different ways, but that only helps make me better in each show.

Tina’s not got a growl as such. People think it’s shouting but it’s not, it’s a very particular tone that she has, and she’s so free with her performance.

Then when I’m on stage as Whitney it’s almost the opposite. You’re so exposed and there’s nowhere to hide as it’s a much slower, more mellow pace of show.

Compare that to Tina and What’s Love Got To Do With It?… Once you’re on stage, there’s no letting up from the moment you start. I love that very strong contrast between the two.

You have such a busy schedule with both shows running alongside each other. With two young children, how do you manage that with family life?

Mark, my husband is amazing; I have the best man in the world. I definitely couldn’t do it without him.

My eldest daughter Kookie is turning eight soon, and she’s only ever known me to be a singer. So, in some ways, she’s used to it but occasionally she’ll say something. My little one Teddy doesn’t know any different to the schedule we now have, I’m lucky she’s so young.

For me, I’m able to shut it off to an extent, as I know this is all about building for their future – whatever job you have, you have to balance family life. I also think we’re so lucky to have things like Facetime now so you can catch up easily and see them if you are away for a few days at a time.

What’s your favourite song to perform as Tina Turner?

There are so many I love. Proud Mary is obviously so much fun, but I also love Typical Male and I Can’t Stand The Rain. But for my absolute favourite… I’ll go Proud Mary. It always used to be Simply The Best which people really loved and went mad for – but these days it’s definitely Proud Mary.

Tina Turner is still such a huge name in music, why do you think she’s still so popular?

She is just such a great all-rounder, and she appeals to men as well as women. She’s a great rock and roll artist. Her songs have never gone away. Even youngsters now, they know tracks like Proud Mary. You do those songs and they’re all over it.

Tina’s had difficult times too over the years, but she came through it. I think people like that side of her story too, as well as the brilliant music.

How did you get into singing and performing as a tribute artist?

When I first realised I could properly sing I was about 13 – I was always mimicking others and that’s how I taught myself. But that real big belting voice wouldn’t necessarily come out. Then, listening to people like Whitney Houston and Mariah Carey, those kind of artists, was when it really came to me. Funnily, I didn’t really listen to Tina Turner when I was younger, my parents played her music in the car, but it wasn’t what I took to at the time.

I was singing in a club and a friend said ‘We should do something different’, I said ‘Shall we try Whitney or something?’. I went home, put down a couple of lines of Whitney and thought ‘Oh, I can sound like her’. It went from there, and a similar thing happened when I started with Tina.

You’ve been working in the music industry for a long time – you started writing with a record company aged just 17 and have been on TV reality talent shows. Can you tell us about the switch to the world of tributes?

I never used to do tributes, I was striving to do my own stuff and put out my own music. Things happened in my life, and I was in between things not really knowing what to do. I didn’t know how to get into the tribute business, but at the same time I felt that by doing that I would miss doing my own thing too.

But I’d done my album and did lots of trying to make it before doing the TV shows. I’d tried the traditional, old fashioned methods to get signed. It was just never meant to be. So, I decided it was time to take it away from being me and into being someone else.

How was your time on The X Factor and The Voice – and what did you learn from the experience?

When I did X Factor – in 2010, 10 years ago, wow – I was in the year of One Direction and Cher Lloyd, and Wagner, he was in Louis Walsh’s Overs category with me, but I went home after judges’ houses.

Doing both of these did give me a boost at the time, even though I got so close but ultimately wasn’t successful. I don’t know what people think of me as an artist having done those shows, but I’m so grateful and glad to have moved on to what I’m doing now.

Forget being mentored by Louis Walsh – tell us about working with Mathew Knowles, Beyoncé’s dad!

So, yes, I did a TV show a long time ago, where I was mentored by Mathew Knowles – Beyoncé’s dad – that was pretty mad. It was Chancers on Channel 4’s T4, and I won the chance from UK auditions to spend a month in Houston, America, where the group of us chosen had various challenges. Mine was to sing at the same studio where Whitney Houston had recorded.

That experience gave me a really tough skin, to know that whatever you do don’t worry about what’s happened in the past; it’s all brought me to where I am now.