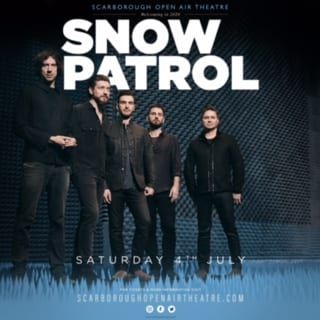 Indie-rock giants Snow Patrol are heading to the Yorkshire coast next summer for what promises to be a sensational night at Scarborough Open Air Theatre.

The band behind such anthems as Chasing Cars, Run, You’re All I Have, Signal Fire, Called Out in the Dark and Take Back the City will bring their sensational live show to Britain’s largest open-air arena on Saturday July 4.

Tickets go on sale at 9am on Friday November 29 via www.scarboroughopenairtheatre.com

Over a 25-year career, Snow Patrol have carved out a unique place for themselves.

Since releasing their debut album, Songs for Polarbears, the band have racked up an impressive array of critical and commercial accolades, including more than 17 million global album sales, one billion-plus global track streams, five UK Platinum-selling albums, an Ivor Novello award and Grammy and Mercury Music Prize nominations.

2006’s Eyes Open saw them truly propelled to a global audience as massive hit single Chasing Cars went on to become UK radio’s most played song of the 21st century.

After taking some time out, Snow Patrol returned in 2018 with the brilliant Wildness – their first studio album in seven years. The band followed up its huge success with a sensational live tour which included a homecoming gig in front of 35,000 fans in Bangor, Northern Ireland.

Snow Patrol’s Scarborough date is presented by Cuffe and Taylor. Director Peter Taylor said: “Snow Patrol are not only one of the biggest-selling UK bands of the last 20 years, but they are also one of the most critically acclaimed live acts. We are delighted to be bringing them to Scarborough Open Air Theatre for summer 2020.

“They are behind some of the best-loved indie rock anthems and these special songs are going to sound amazing at this unique venue. I have absolutely no doubts this is going to be an incredible night.”