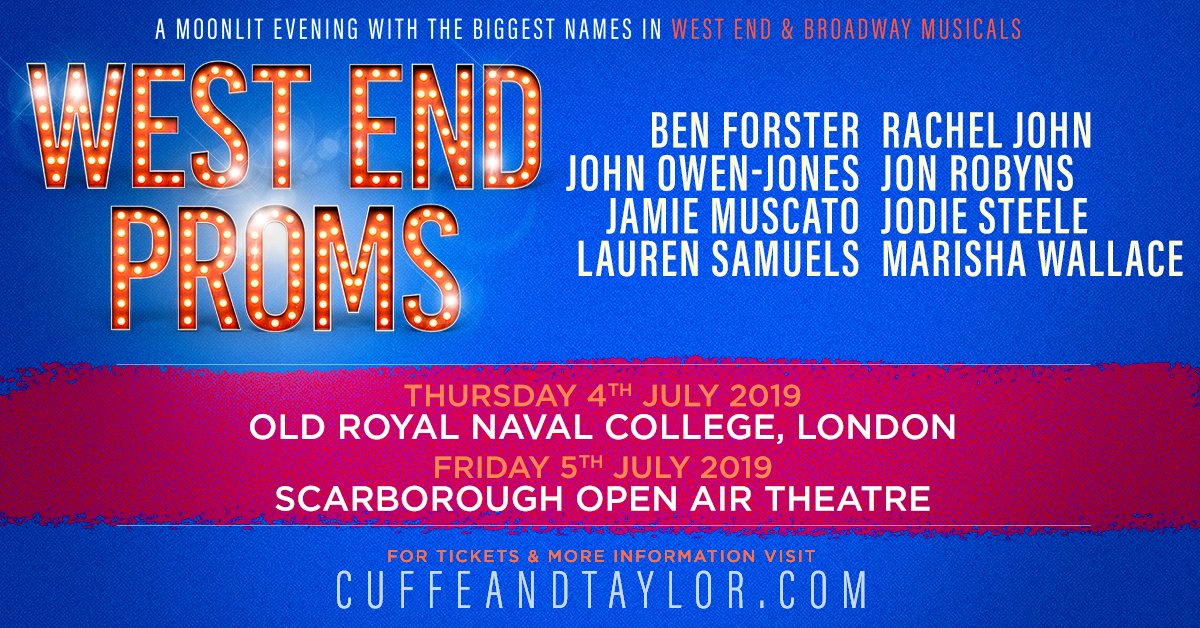 SPECTACULAR WEST END PROMS IS HEADING TO GREENWICH AND SCARBOROUGH

Some of the world’s most talented musical theatre stars, from Broadway and the West End, will unite this summer as part of West End Proms – an evening of beautiful live music, complete with a stunning 32-piece orchestra.

Shows are confirmed for London’s Greenwich Music Time on Thurs 4 July and Scarborough Open Air Theatre on Fri 5 July. Tickets go on sale at 9am this Fri 29 March from www.cuffeandtaylor.com

West End Proms will present a breath-taking evening of live music from the past seven decades of popular musical theatre. This immaculately performed and vividly compelling show will include songs from Les Misérables, Phantom Of The Opera, The Greatest Showman, Rock Of Ages, Wicked, Sunset Boulevard, Dear Evan Hansen and many more.

West End Proms boasts a top cast, including the award-winning John Owen-Jones (Les Mis), Ben Forster, winner of ITV’s Superstar (2012), plus Rachel John and Jon Robyns, stars of West End show of the moment Hamilton. Jodie Steele and Jamie Muscato, two of the leading actors from the show Heathers, plus Lauren Samuels, who rose to prominence as a finalist on the BBC’s Over the Rainbow, and Marisha Wallace, leading lady of Dreamgirls and Waitress are also confirmed.

The show will make its debut at London’s Greenwich Music Time on Thurs 4 July, before travelling to Scarborough Open Air Theatre on Fri 5 July.

Director Peter Taylor said: “This is the first time we’re bringing West End Proms to London and Scarborough and it’s going to be an incredible evening. This is more than a concert; it’s a show worthy of the West End and Broadway. We’ve brought together some of the world’s most beautiful voices complete with a stunning live orchestra. It will be an extraordinary night.”

London’s Greenwich Music Time series of concerts, which will take place 1-7 July 2019, are set against the city’s most impressive backdrop. Framed by the pillars of the stunning Old Royal Naval College, the Thames and the London skyline are viewable against the stage to complete the ultimate concert experience in the capital. Cliff Richard, Paul Weller and Groove Armada are among the names already confirmed for this year’s bill.

Lauren Samuels (We Will Rock You / Bend It Like Beckham)

Tickets for West End Proms go on sale at 9am on Fri 29 March from www.cuffeandtaylor.com