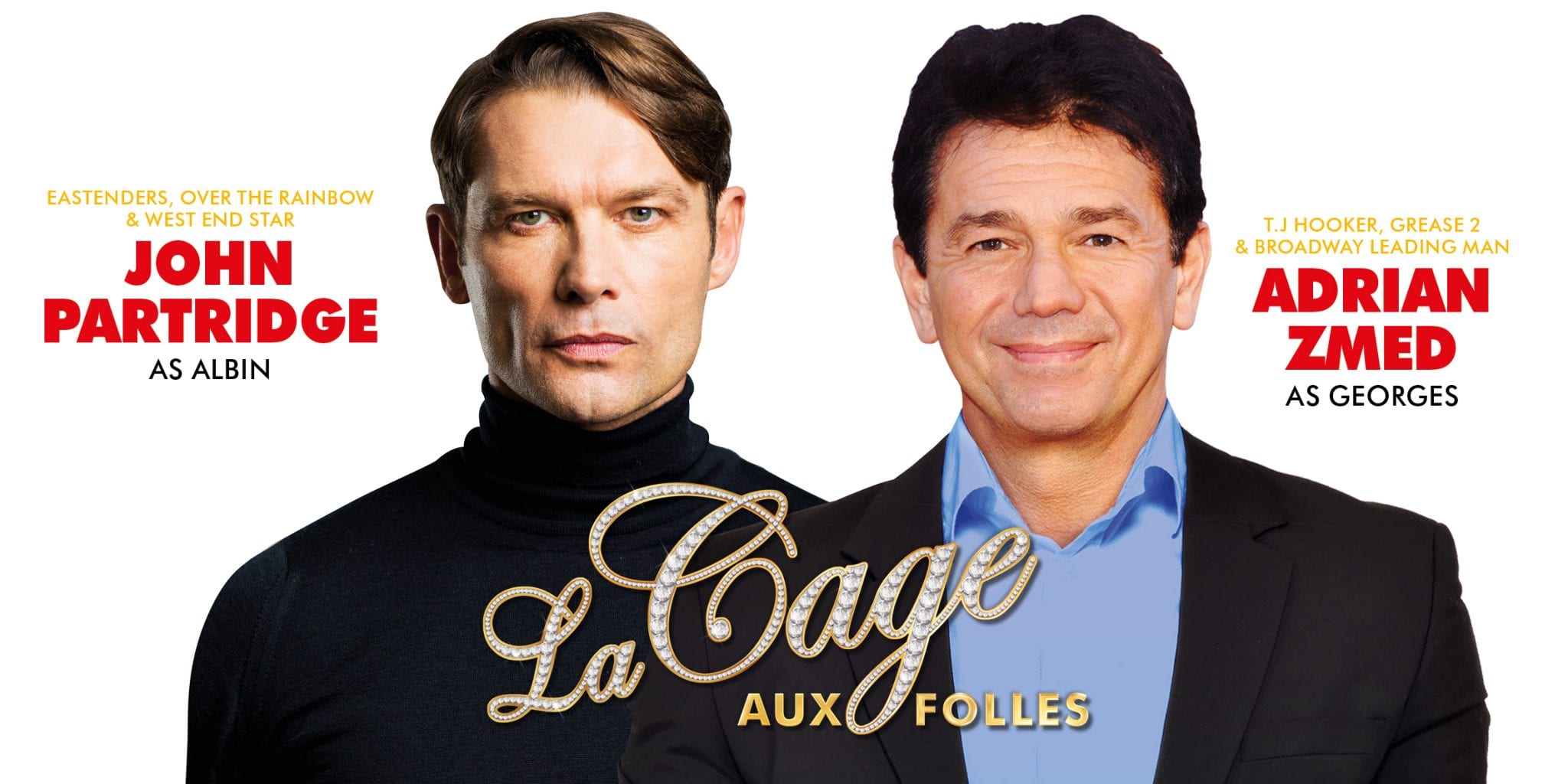 The much-loved musical will star JOHN PARTRIDGE as ‘Albin’ and ADRIAN ZMED as ‘Georges’, when it runs at Blackpool Opera House from Tuesday 21 to Saturday 25 February.

Tickets priced from £17 are on sale now from www.wintergardensblackpool.co.uk

John Partridge will play the iconic role of ‘Albin’, who moonlights as star drag act Zaza at the infamous La Cage aux Folles nightclub. Partridge’s extensive theatre credits include the West End productions of A Chorus Line at the London Palladium, Cats, Starlight Express and Chicago. He is also well known for playing the loveable Christian Clarke in BBC’s EastEnders and as a judge on TV’s Over The Rainbow.

Adrian Zmed will play ‘Georges’, partner of Albin and owner of the nightclub. Zmed co-starred with William Shatner as ‘Officer Vince Romano’ in the 80’s hit TV show T.J. Hooker, which ran for 90 episodes over five years, and for playing ‘Johnny Nogerelli’ in the cult classic film Grease 2. This will be his first stage appearance in the UK although he is no stranger to Broadway musicals having previously led the casts of Grease, no fewer than three times, Falsettos and Blood Brothers.

He said: “We are delighted Blackpool Opera House is part of the first ever UK tour of this most spectacular production and that we will be the first North West theatre to welcome the show.

“La Cage has been wowing audiences both sides of the Atlantic since the early 80s and I have no doubt Blackpool’s audiences will absolutely love this show.

“The casting of John Partridge and Adrian Zmed is absolutely perfect as both are such well-known stage actors and we will look forward to welcoming them to Blackpool.”

Written by Harvey Fierstein and Jerry Herman, and based on the 1973 French play of the same name by Jean Poiret, La Cage Aux Folles follows the story of Georges, the manager of a Saint Tropez nightclub, and his partner, Albin, a drag artiste and the club’s star attraction. They live an idyllic existence in the south of France but behind the curtains of this sparkling extravaganza, all may be about to change when Georges’ son Jean-Michel announces his engagement to the daughter of a notorious right-wing politician determined to close down the local colourful night-life. Drama and hilarity ensue when a meeting of the parents forces them to cover up their vibrant lifestyle. Will Albin be able to play the role of his life to ensure that Jean-Michel can marry his love?

This show-stopping score includes The Best of Times, Song on the Sand and the iconic I Am What I Am, which has been recorded by musical legends Gloria Gaynor, Shirley Bassey and Tony Bennett.