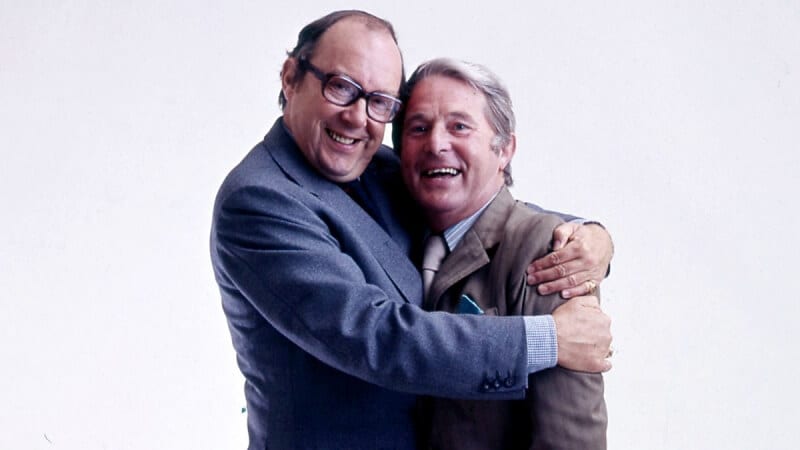 Stunning New Tribute To Eric & Ernie To Be Unveiled

The first ever statue celebrating the nation’s favourite comedy double act Morecambe and Wise will be unveiled at Blackpool’s world famous Winter Gardens next month.

Renowned sculptor Graham Ibbeson has completed work on the stunning 8ft tall bronzed statue which has been commissioned to mark the 75th anniversary of Eric and Ernie first appearing on stage together in 1941.

Its permanent home will be the spectacular domed entrance to the Winter Gardens in the heart of Blackpool – dubbed Morecambe and Wise’s “spiritual home” by those closest to the legendary double act. Eric and Ernie performed in Blackpool more than 1,000 times in their illustrious career.

This wonderful new statue will be unveiled on FRIDAY OCTOBER 14TH at 11AM by Eric’s widow Joan, alongside eldest son Gary and daughter Gail together with a representative from Ernie’s family. They will be joined on the day by many friends and fans of Morecambe and Wise.

Eric Morecambe’s widow Joan said, on behalf of herself and Doreen Wise (Ernie’s widow): “This is a day which Doreen and I never expected to happen.

“We never dreamt of seeing a statue unveiled to both Eric and Ernie in Blackpool, a town that we have so many happy memories of from all the many shows the boys performed there over the years. It will be a day that will live with us forever.”

The new statue of the double act, which cost £75,000 and has been funded through donations, has been gifted to Blackpool Winter Gardens.

Graham Ibbeson, who previously sculpted the now famous statue of Eric in the comedian’s hometown of Morecambe in 1999, said: “I am delighted to have brought the boys back together so the nation can see them as they should be – Eric and Ernie alongside one another.

“Morecambe and Wise are the greatest double act to have ever graced British TV screens and both Eric and Ernie’s families agree their spiritual home is Blackpool.

“Eric and Ernie’s families have been involved right through the process and they love the statue which means an awful lot. I feel sure it will become a hugely popular and much-loved attraction in Blackpool for generations to come.”

Eric and Ernie entertained hundreds of thousands of people during their many years in Blackpool, playing at seven theatres, six summer seasons and a starring role in the 1955 Royal Variety Performance at the Winter Gardens.

Michael Williams, Winter Gardens Managing Director, said: “The statue is wonderful and we cannot wait to see it unveiled at the entrance of the Winter Gardens where Morecambe and Wise performed so many times in their career.

“This will be a permanent tribute to the nation’s favourite comedy double act which I am sure fans from around the world will want to come and see.

“Graham has done a wonderful job and we cannot thank him enough for all his hard work together with the families of Eric and Ernie who decided Blackpool – the boys’ spiritual home – was the fitting location for this long overdue tribute to these two comedy greats.”

dentist in my area