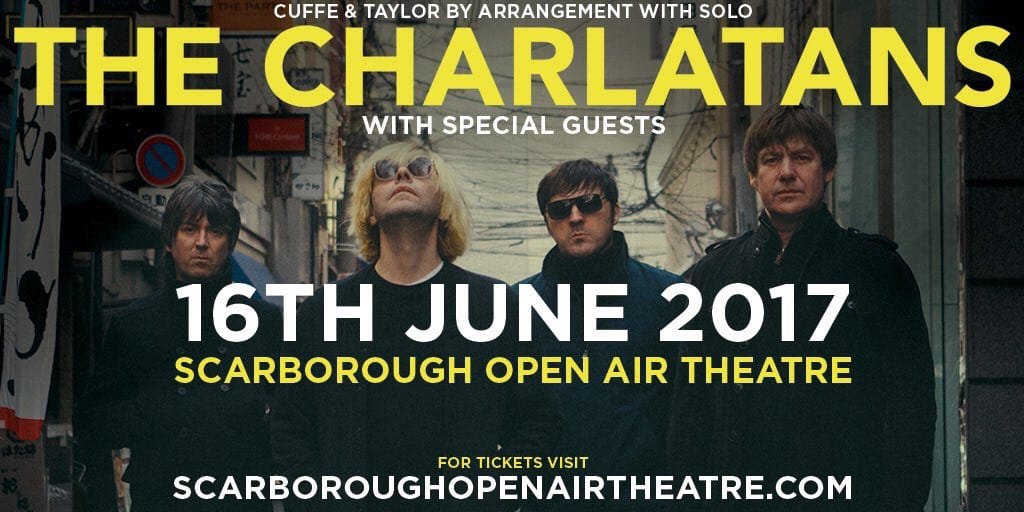 THE CHARLATANS TO PLAY SCARBOROUGH OPEN AIR THEATRE IN 2017

The Charlatans are set to rock the Yorkshire coast next summer on what promises to be an unforgettable night at Scarborough Open Air Theatre.

For more than 25 years, the globally loved band have been an inspirational force in British music chalking up 22 Top 40 singles and three number one albums.

The Charlatans’ headline show at Scarborough OAT – Europe’s largest open air theatre – is on Friday June 16, 2017. Tickets for the concert go on sale at 9am on Friday December 9.

Lead singer Tim Burgess said: “We have played some truly memorable gigs in Yorkshire down the years and we expect another unforgettable night in Scarborough next summer.

“Yorkshire crowds have always been among our warmest and loudest supporters and we cannot wait to play for them again.”

The Charlatans – Tim Burgess, Mark Collins, Martin Blunt and Tony Rogers – remain one of the most explosive live acts around, a finely honed musical powerhouse the world adores.

Their back catalogue is quite simply a non-stop jukebox of indie rock’s greatest hits including the unmistakable sound and swagger of The Only One I Know, Weirdo, Just When You’re Thinkin’ Things Over, One to Another, How High, North Country Boy and 2015’s stunning Come Home Baby.

The band’s 12th studio album Modern Nature received sensational reviews, some critics citing it as their best-ever. They have toured the album around the globe to sold out audiences since its release in 2015.

The Scarborough OAT concert is presented by promoters Cuffe and Taylor. Promoter Joel Levack said: “The Charlatans are one of the biggest bands to have come from the UK in the last 25 years. They have written the soundtrack to so many indie fans’ lives and we cannot wait for them to take to the stage at Scarborough.

“This is another fantastic night of live music heading to the Yorkshire coast in 2017.”

Tickets for The Charlatans at Scarborough OAT go on sale at 9am Friday December 9. They are available from www.ticketmaster.co.uk or www.scarboroughopenairtheatre.com and in person or by calling Scarborough Open Air Theatre Box Office (0844 844 0444 ) or Discover Yorkshire Coast Tourism Bureau (01723 383636).