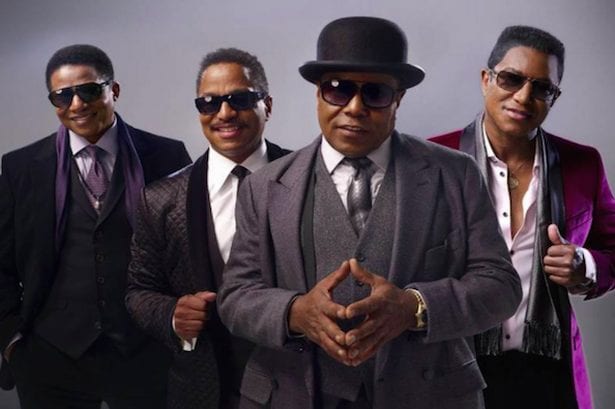 Originally formed as The Jackson 5, the group sold more than 200 million records during their time with the legendary Motown label which included such global hits as
I Want You Back, ABC, The Love You Save and I’ll Be There.

And The Jacksons will bring all their hits to Scarborough Open Air Theatre on Saturday June 17 for an amazing concert at Europe’s largest open air theatre.

Tickets go on sale at 9am on Friday from www.ticketmaster.co.uk

Signing their first record deal in 1967, the group, with the late Michael Jackson, made history in 1970 as the first recording act whose first four singles reached No. 1 on the US Billboard Hot 100.

Building a reputation for their combination of music and brilliant choreography, they went on to score 17 Top 40 singles on the Hot 100 – together with 22 UK Top 40 singles – including Never Can Say Goodbye, Show You The Way To Go and Dancing Machine.

Following the group’s massive success in the 1970s, they spent the 1980s and 90s concentrating on successful solo careers. They reformed for a series of concerts in 2001.

In 2012 The Jacksons reformed for their ‘Unity Tour’ and have packed theatres and arenas around the world ever since.

Tito Jackson: “We had the privilege of performing for Her Majesty The Queen when we first came to the UK in 1972 and we’re always excited to return.

“The British audiences love their music and we can’t wait to share ours with them when we bring our show to Scarborough this summer!”

The Jacksons’ Scarborough Open Air Theatre show is promoted by Cuffe and Taylor.

Director Peter Taylor said: “The Jacksons are one of the most legendary groups in music history.

“Their eternal mix of infectious funk and pop soul defined a generation and was the catalyst not only for hundreds of millions of record sales, but for inspiring the generations of hit makers who followed them.

“We are delighted to be bringing The Jacksons to Scarborough Open Air Theatre as this will be one of the live music events of the summer.”

Tickets for The Jacksons’ concert at Scarborough OAT, go on sale at 9am on Friday March 24. They are available from www.ticketmaster.co.uk (0844 844 0444) and www.scarboroughopenairtheatre.com or in person from Scarborough Open Air Theatre Box Office (01723 818111) and the Discover Yorkshire Coast Tourism Bureau (01723 383636).