UB40 ft ALI CAMPBELL and ASTRO are back! 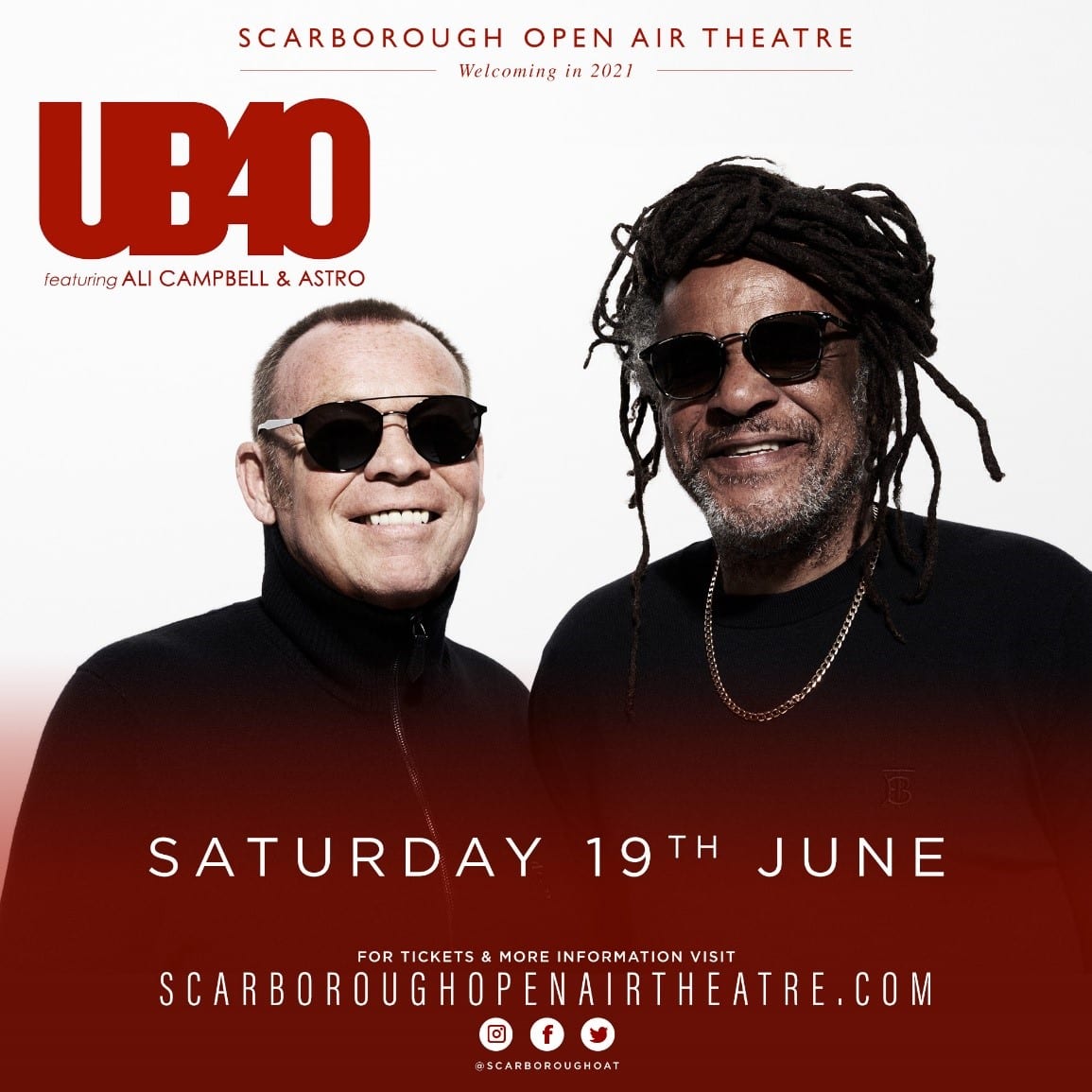 Ali and Astro bring their inimitable blend of reggae and pop hits to the Yorkshire coast on Saturday June 19.

Tickets go on general sale via www.scarboroughopenairtheatre.com at 9am on Friday October 23.

UB40 are one of the UK’s most beloved music institutions, achieving three UK Number Ones – Red, Red Wine, I Got You Babe (ft. Chrissie Hynde) and I Can’t Help Falling In Love with You – not to mention 17 Top 10 singles.

Since reuniting six years ago, founding members Ali and Astro – backed on stage by a fantastic seven-piece reggae band – have become a formidable touring outfit. They played a sensational show at Scarborough OAT in 2017 and their 2019 ‘The Real Labour of Love’ tour visited Australia, New Zealand, Europe and America.

Ali and Astro have been active during this year’s enforced hiatus. As well as writing songs for their forthcoming album, they reassembled their touring band remotely to record a lockdown single, a poignant cover of the late Bill Withers’ Lean On Me, in aid of NHS Charities Together.

They are now looking forward to getting back on the road in 2021 with a band comprising bassist Colin McNeish, guitarist Winston Delandro, keyboardist Michael Martin, drummer Paul Slowly, backing singer Matt Hoy and a brass section of trumpeter Colin Graham and saxophonist Winston Rose.

And while a handful of songs from the forthcoming album will feature alongside classic UB40 hits, Ali is keen to include older numbers such as King (about the legacy of American Civil Rights leader Martin Luther King) and One In Ten (about unemployment in the UK) that are, unfortunately, as timely today as when they were first sung in 1980 and 1981.

Ali said: “We wrote King 40 years ago, but it’s still representative of what’s happening in America. It’s depressing that nothing has changed.

“It’s the same with One In Ten in the UK. With the impact the coronavirus could have on jobs, we could soon be looking at unemployment figures on a par with the early Eighties. Those songs will feature in a show we’ve been honing for the past 12 years.

“We’ll always play the classics, like Red Red Wine and (I Can’t Help) Falling In Love With You, but we like to change the beginning and end of the show. We’ll play Lean On Me and maybe add three or four new songs. The band members are all fantastic musicians and we’ve climbed back up to the biggest venues in the past 12 years.”