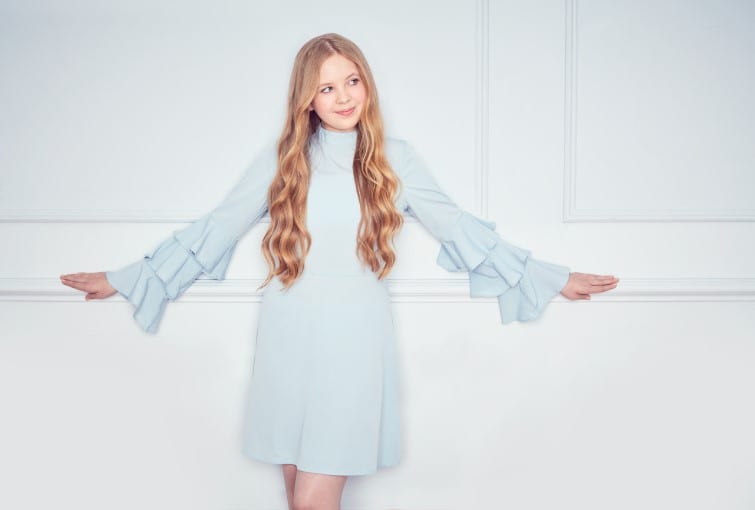 It is announced today that 13-year-old Britain’s Got Talent finalist Beau Dermott (pictured below) is being added to the bill along with 25 youngsters from across the North West.

Following her spellbinding performance on Britain’s Got Talent last year, Beau – the girl with the big voice and big heart – has now signed a major deal with Decca Records to release her debut album, Brave, on August 25. She may be just 13, but Beau’s astonishing voice is already insured for £1 million pounds. It’s been insured by Lloyd’s of London to ensure her unique voice is protected, especially while she’s still at school.

Beau shot to fame when her electrifying audition on Britain’s Got Talent earned her the golden buzzer from judge Amanda Holden – now Beau’s mentor – taking her straight into the live finals. Singing ‘Defying Gravity’ from the hit musical Wicked, the YouTube clip of her performance currently has an astounding 24 million views. She’s even got the backing from Idina Menzel, the original star of Wicked, who said: “OMG!! Beau Dermott you gave me chills with your performance of Defying Gravity”.

Tickets are on sale now from www.lythamfestival.com

In addition, it is announced that 25 youngsters from across the North West will also star in West End Proms performing a couple of numbers both on their own and with one of the lead performers.

The group of 6 – 12-year olds were selected following an audition process and are being prepared for their performances by Fylde Stage Academy principle, Di Barron.

Lytham Festival director Peter Taylor said: “I am thrilled we are able to present some of the best rising talent in musical theatre with West End Proms.

“This is not just a concert, this is a complete show worthy of any West End or Broadway theatre. We are bringing together some of the world’s most talented musical theatre stars and to now welcome Beau and a group of youngsters to take part is wonderful.

“Lytham Festival is all about creating events which appeal to the masses. Each year we try to programme a festival which is wide and varied. We have done that once again this year and I am particularly pleased we are able to include so many young and extremely talented performers in that too.”

To celebrate the announcement, Lytham Festival Hub – the ticket office in the town’s Clifton Square – will be offering a very special Golden Ticket Giveaway this weekend.

One lucky customer will win two VIP tickets to see Wednesday night headliner Olly Murs, a meet and greet with support act Louisa Johnson and an upgrade to the VIP Garden for two.

To find out more about Lytham Festival and to purchase tickets go to: www.lythamfestival.com