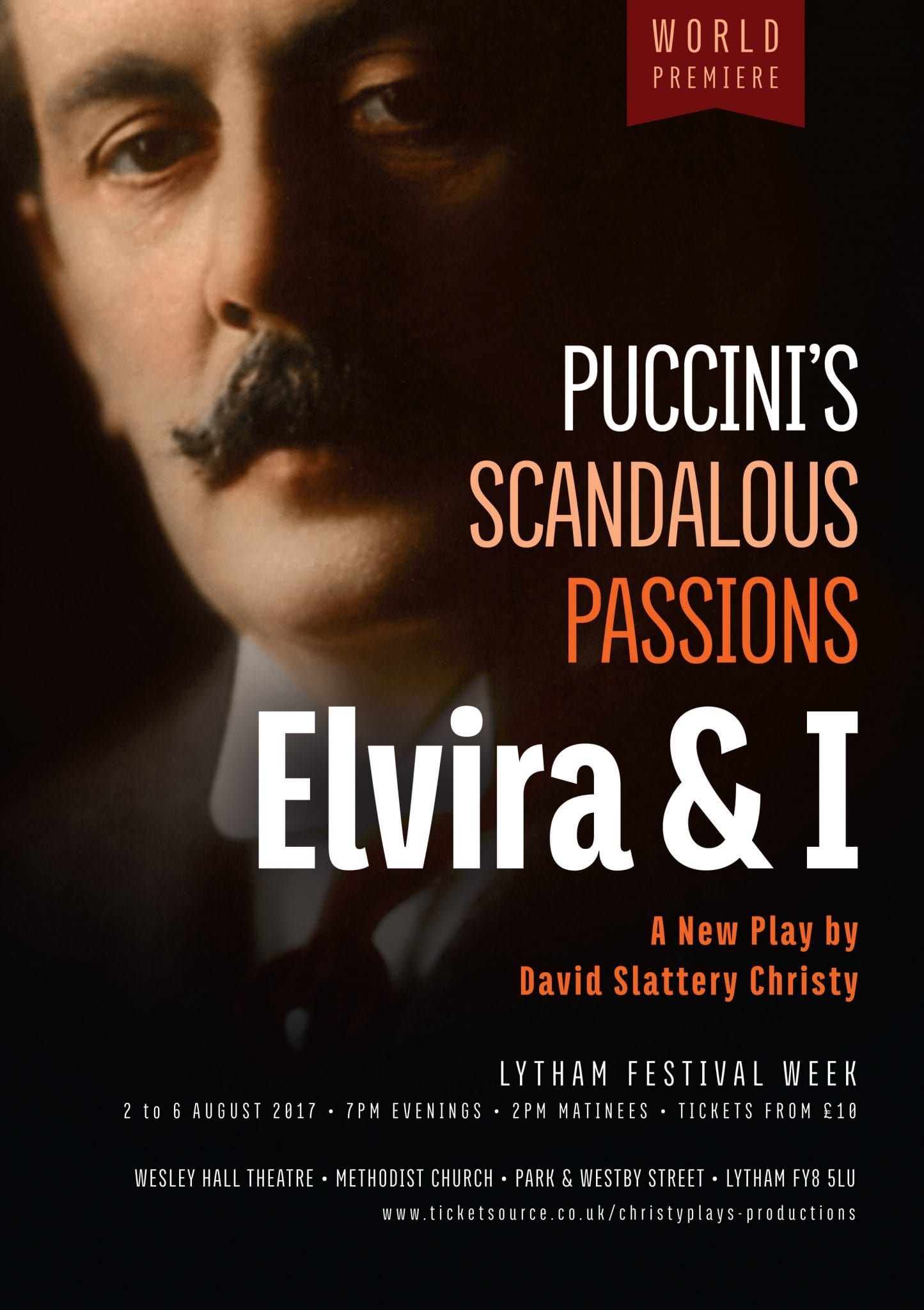 Lytham Festival will welcome a world first this summer as playwright David Slattery-Christy presents the debut of his new theatrical work which offers affairs, jealousy and slanderous accusations… and, yes, a legendary opera or two!

Elvira & I: Puccini’s Scandalous Passions is the new two-act play which explores the stormy relationship between famed composer Giacomo Puccini and his wife Elvira.

Set in their villa at Torre Del Lago, Italy, between 1901 and 1909, the play unravels the couple’s emotional life and how it mirrored the tragic opera plots he composed during this period including Madama Butterfly and The Girl of the Golden West.

The play will be performed at Lytham Methodist Church during Lytham Festival between Wednesday August 2 and Sunday August 6. Tickets are on sale now.

As a playwright and author, Lytham-based David has extensively featured on BBC Radio and TV. He was the Ivor Novello consultant on Robert Altman/Julian Fellowes OSCAR and BAFTA winning film Gosford Park.

Of his new production David said: “The play will give audiences a new insight into the life of Puccini and the relationship with his wife Elvira while he was working on Madama Butterfly.

“We associate Puccini operas as being full of love, passion, deceit, betrayal and death but his real life was just a dramatic, if not more so. If you love Puccini’s opera you will be fascinated to learn about his private life and how it influenced his work.”

The play, which took five years to research and write, looks at the complex relationship between Puccini and Elvira and how it survived numerous affairs, irrational jealousy, and Elvira’s slanderous accusations which ended tragically.

David added: “I started to sketch out ideas for writing a simple book biography about Puccini a few years back.  The more I learned about him and his relationship with Elvira, the more fascinated I became and the more I realised that their story needed to be told.”

David said: “There is something for everyone, something for all ages to enjoy. Bringing this new play to have its world premiere at Lytham Festival will give festival goers a unique opportunity to experience a live theatre performance about a famous composer they will have heard of even if they have never seen an opera.

“Everyone involved in this world first production believe this is going to be something truly special.”

Elvira & I – Puccini’s Scandalous Passions join a mega line-up for Lytham Festival 2017 which includes headline performances by Olly Murs, Haçienda Classical, 80s and 90s stars The Human League, Midge Ure, and Dodgy, Ska legends Madness and a host of West End stars over five nights in the Lytham Green Main Arena together with The Mersey Beatles and Woofers Comedy Club at Lowther Pavilion .

Tickets for both matinee and evening performances of Elvira & I: Puccini’s Scandalous Passions at Lytham Methodist Church are available via www.ticketsource.co.uk/christyplays-productions

Tickets for all other Lytham Festival events are on sale now and are available from lythamfestival.com or by calling 0844 8154874.