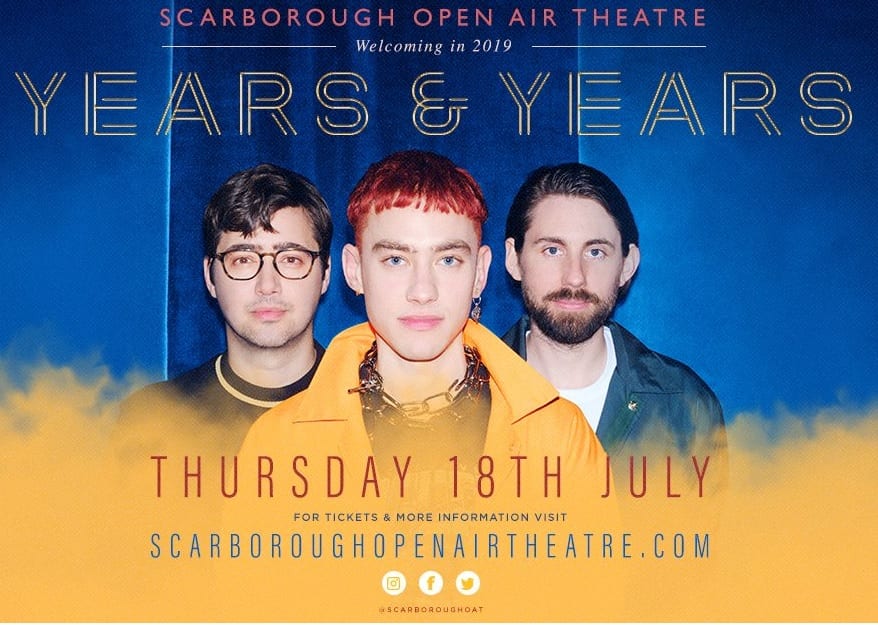 Tickets go on sale on Friday at 9am via www.scarboroughopenairtheatre

It has been a whirlwind four years since Years & Years’ 2015 debut smash hit album ‘Communion’ landed with the massive hit singles ‘King’, ‘Desire’ and ‘Shine’.

The band followed it up with last year’s breath-taking ‘Palo Santo’ which spawned the singles ‘Sanctify’, Top 10 hit ‘If You’re Over Me’ and ‘All for You’.

The album was a Top 3 hit in the UK and topped the Billboard Dance/Electronic Album Chart in the US.

Years & Years – Olly Alexander, Mikey Goldsworthy and Emre Türkmen – are famed for their electrifying live shows. They are the reigning ‘GQ Live Act of The Year’ and have built a massive fanbase around the globe.

And it’s been a brilliant start to 2019 for the band. Recent single ‘Play’ with Jax Jones went Top 10 in the UK alongside a nomination for Best British Band at this year’s BRIT Awards

Their Scarborough Open Air Theatre gig is presented by Cuffe and Taylor. Director Peter Taylor said: “Years & Years are quite simply one of the most exciting live acts around and we are beyond delighted to be bringing them to Scarborough OAT this summer.

“The band – who are fronted by Olly Alexander who, of course, hails from just down the road in Harrogate – have released hit after hit over the last few years.

“They’ve become the soundtrack to many music fans’ lives and for me, and I’m sure many other people, this is going to be one of the highlights of the summer here on the Yorkshire coast.”