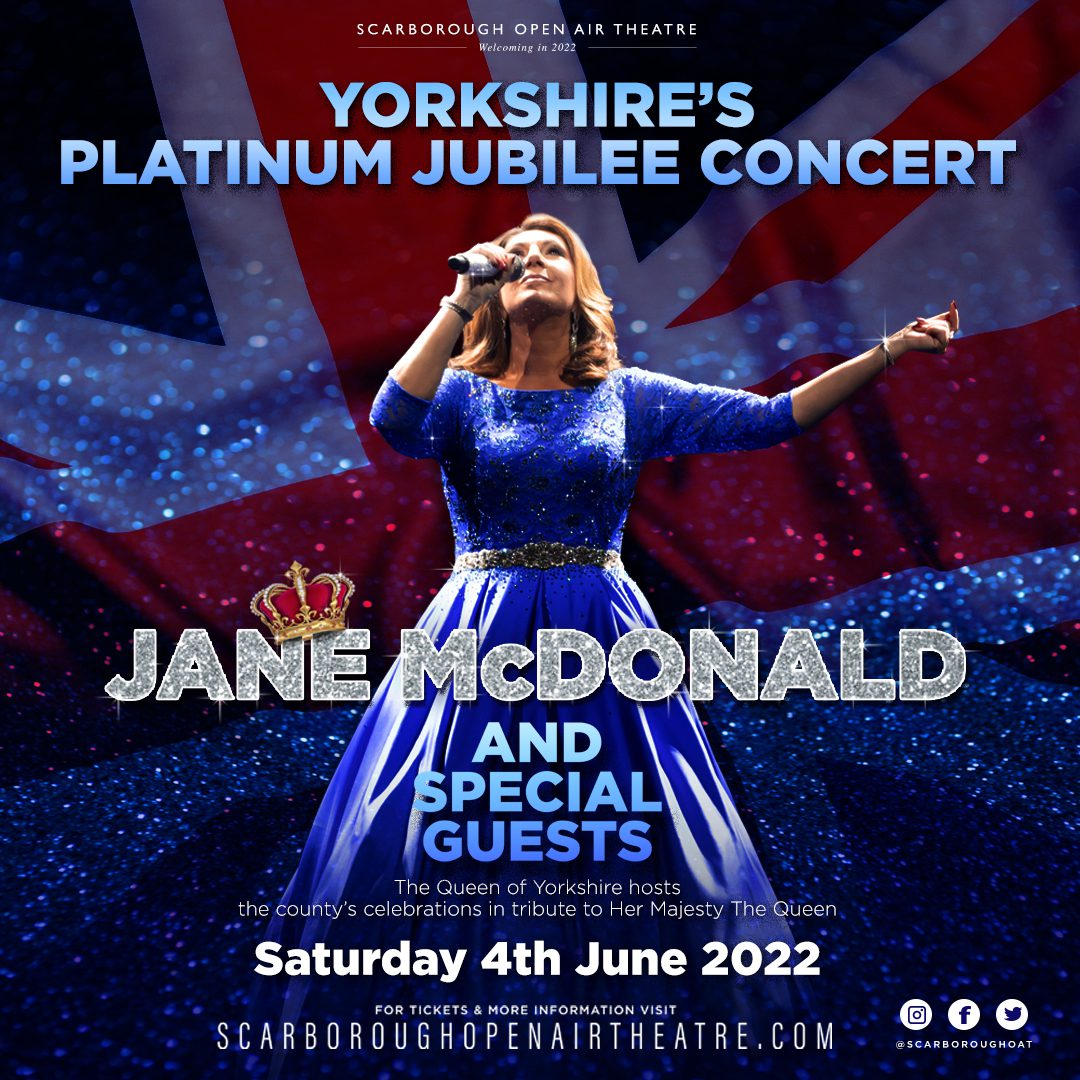 Yorkshire’s very own singing star Jane McDonald will light up Scarborough Open Air Theatre in 2022 when she headlines a special concert to celebrate Her Majesty The Queen’s Platinum Jubilee.

Jane will be joined by a host of special guests for Yorkshire’s Platinum Jubilee Concert taking place at Britain’s biggest outdoor concert arena on Saturday June 4.

Tickets go on general sale via www.scarboroughopenairtheatre.com at 9am on Friday December 17.

Jane won a place in the nation’s hearts in the BBC docusoap The Cruise back in 1998 and became a household name overnight. Since then, she has toured extensively selling out live concerts including sell-out shows at the Royal Albert Hall and the London Palladium twice, as well as The MGM in Las Vegas.

Most recently Jane released her 10th studio album Let The Light In and entertained huge audiences with her tour of the same name. Next week she is due to host her spectacular annual Christmas concert at Leeds First Direct Arena.

Jane has appeared on numerous high-profile television shows including Star For A Night and Loose Women as well as performing at three Royal Variety Shows.
She returned to our TV screens fronting Channel 5’s BAFTA award winning Cruising with Jane McDonald, along with Jane & Friends, Holidaying With Jane McDonald and the upcoming new series Jane McDonald Explores Yorkshire.

In 2015, Jane earned rave reviews when she played the role of Grizabella in Andrew Lloyd Webber’s Cats in an eight-week run at Blackpool’s Opera House.

Yorkshire’s Platinum Jubilee Concert is the latest addition to a stellar line-up for Scarborough OAT’s 2022 season with other headliners including Lionel Richie, Lewis Capaldi, Bryan Adams, Elbow, Tom Jones, The Script, Simply Red, Crowded House and Frankie Valli and The Four Seasons, plus many more still to be announced.

Speaking about Yorkshire’s Platinum Jubilee Concert, Jane said: “This really is an exciting announcement, and I’m absolutely thrilled to be headlining this very special concert celebrating The Queen’s Platinum Jubilee. And where better to be holding such a brilliant event than in Yorkshire.

“Everyone knows I’m a proud Yorkshire lass so it will be so thrilling to walk on to stage in Scarborough for these celebrations.”

Scarborough OAT venue programmer Peter Taylor, of promoters Cuffe and Taylor, added: “Jane McDonald is THE Queen of Yorkshire so we are delighted she will be headlining Yorkshire’s Platinum Jubilee Concert.

“Jane sells out gigs, is a TV star and has wowed musical theatre audiences and critics. She is a huge talent and is the perfect star for this very special concert.

“2022 is going to be a massive year for Scarborough Open Air Theatre and we are very excited to be adding a concert celebrating Her Majesty The Queen’s Platinum Jubilee.”

For more information about all show and tickets go to www.scarboroughopenairtheatre.com